Four twelve years Lynn and I have been members of the Unitarian Universalist Church of Manchester, NH. Since 2004 we’ve been the official church Sexton’s caring for the building and cleaning up after the congregation. Until the 5th of February. I’ve been taking the only action that I can afford against Paul Doolittle of Derry, NH since he stole Lynn’s 1970 Dodge Challenger. Here’s a link to another post I’ve written. Paul bills himself as “the world’s most honest man” and why not? Do you think a confidence man is going to announce his intentions to clean your pockets? No one want to come forward officially but I’ve talked with several people who’ve had a close shave from Paul Doolittle. Paul’s technique is to never got greedy. Take people for some money but not enough that his victim won’t be able to write it off under the go along to get along mentality. Then there’s the cost of legal fees and the embarrassment from admitting in public that you’ve been conned.

Then there’s the crew at the Unitarian Universalist Church in Manchester, NH.

After a dozen years we knew these people had their faults and hypocrisy but we forgot that we’re the wrong type of gay people to be accepted by these kinds of people.

On Wednesday the 30th of January we went to work as usual and found ourselves in the middle of a meeting concerning us. Board members Web Anderson, Anne Smith and Board President Curtis Smith came to the church to see us along with student Minister Julie Lombard and Interim Minister Steve Edington. These fine people sat us down in the Lounge at the big meeting tables so everything was a civilized as could be. Curt smith then opened with some notes on a threat made by Paul Doolittle to me and Lynn. “If you two don’t take down your website threatening Paul Doolittle he says here that He’s going to the Derry, NH police department and swear out a restraining order against you and you won’t be able to work here any more.” We responded with our side of the story. and Curt S. came back to us with “I’ve read your web site and agree that it has a threatening tone towards Paul Doolittle especially where you say “I hope you’re warm and safe in your home.””

Now that was written while we were living in a tent in the woods. We did not feel safe. Even now living in our RV in now undisclosed locations we fear physical reprisal by Paul’s son Matthew or other people in Paul Doolittle’s employ. 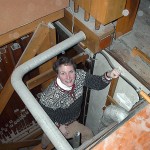 Student Minister Julie Lombard stepped in with some productive suggestions regarding dispute resolution and we agreed to go through what could possibly be a year long process. But the only leverage we have over Paul Doolittle is our web log at http://www.arts-attic.com/blog and we refuse to take the references to Paul Doolittle and, we’re learning, the auto restorer Michael Mancini of Mike Mancini’s American Muscle Car Restorations Inc Now Mr. Mancini had a web site that was featuring Lynn’s Challenger because it is such a rare car and such a spectacular find. But the web site is down.

and the Google cached:

“This is a very rare 1970 Challenger 440 Six Pack RT Convertible. 7 Identical examples were built to debut the new 70 Challenger. This is the last of the 7 that had not been accounted for. It is loaded with every possible option. It will undergo a complete OE level rotisserie restoration. This will be the 2nd of its kind to be restored by us. We know more about all 7 promo Challengers than anyone on the planet. Very exciting project.”

Just in case you want to believe Paul Doolittle and the UUCM leadership when they tell you that this theft is nowhere near as big as Lynn and I are making it out to be.

From where I sit, Curt Smith did a risk analysis and chose the wrong side to come down on.

55 years old. By training, ability and experience I am a master toolmaker. My most recent projects include designing and building a process to grind a G rotor pump shaft with four diameters and holding all four diameters within plus or minus 4 microns of nominal. This was an automated process using two centerless grinders refitted to my specifications using automatic load and unload machines plus automatic feedback gauging. I also designed and built an inspection machine to check for the presence and size of a straight knurl on a hinge pin using a vision system for non-contact gauging.
View all posts by Art →
This entry was posted in Unitarian Universalist Manchester. Bookmark the permalink.