I turn 58 years old in September. I’ve been living in constant pain since this day in 1984. The doctors were right, the pain is getting worse with age and yes again, it isn’t something you can get used too living with.

The bike was a freshly restored Suzuki T250. The riding gear I was wearing was a combination of boat shoes, jogging shorts, athletic shirt and my bright orange Bell helmet. The speed was about 30 MPH and the damage was the result of being rear-ended by a pick up truck and ultimately vaulting over the handlebars.. Hey! I was just going down to the corner farm stand to pick up some corn for lunch. Didn’t even bring my driver’s license with me for the trip.

Treatment consisted of cleaning the road rash and after arguing with the nurses and doctors to convince them that my neck was broken about ten days in a Stryker frame. The Stryker frame stay had two purposes, the first was to allow the road rash to heal. The second was to reduce the fracture. I split C-2 into two pieces about 1/4 inch apart when I failed to complete my somersault due to a lack of altitude. The fracture was reduced over the course of eight days by flipping me like a pancake every two hours.

Road rash. All I was wearing was a thin athletic shirt.

There is a horseshoe shaped clamp with a set-screws into my skull to provide tension on my head through a cable and pulley. Part of the two hour routine was to grab the sheets and pull me back to the bottom of the bed in the same fashion as winding a clock.

After two hours of lying on my back it was time to flip me over onto my belly and pull the cloth away from my road rash. It is easier if the nurse sneaks up on you and does it all at once. Trust me. People who try to be compassionate doing this deserve to be shot. A sadist who can pull the sheet off in one yank goes to the head of the line in my book.

I though that I was blind because my face was so swollen initially that I couldn’t open my eyes to see. 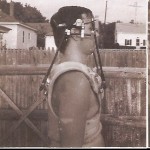 Black and white Polaroid of my right side so that I could see what I looked like.

Some asshole said “If I looked like that I wouldn’t go out in public” and I replied “in two months I’ll be out of this thing and you’ll still be an asshole.” Everybody with me drank for free that afternoon courtesy of the manager after a waiter reported the exchange of pleasantries.

A happy day at the crown and anchor in Provincetown, MA

I had somebody sit and watch while I cleaned my swimming pool. I liked cleaning the pool but if I fell in I feared that I would sink straight to the bottom head first.

Before terror ruled the world, NH had th common sense to issue me a driver’s license with the admonition to not drive until the brace came off.

I had this photo taken of me right after the police left. I wanted to remember and be able to show that this is what I looked like when I was told in a politely threatening manner that it was o-kay to try and kill queers.

55 years old. By training, ability and experience I am a master toolmaker. My most recent projects include designing and building a process to grind a G rotor pump shaft with four diameters and holding all four diameters within plus or minus 4 microns of nominal. This was an automated process using two centerless grinders refitted to my specifications using automatic load and unload machines plus automatic feedback gauging. I also designed and built an inspection machine to check for the presence and size of a straight knurl on a hinge pin using a vision system for non-contact gauging.
View all posts by Art →
This entry was posted in Art Joly. Bookmark the permalink.