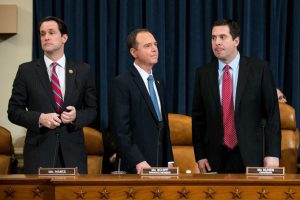 “Chairman Nunes’ decision, supported by House Speaker Ryan and Republican Members of the House Permanent Select Committee on Intelligence, to publicly release misleading allegations against the Department of Justice and Federal Bureau of Investigation is a shameful effort to discredit these institutions, undermine the Special Counsel’s ongoing investigation, and undercut congressional probes. Furthermore, their refusal to allow release of a comprehensive response memorandum prepared by Committee Democrats is a transparent effort to suppress the full truth.

“As the DOJ emphasized to Chairman Nunes, the decision to employ an obscure and never before used House rule to release classified information without DOJ and FBI vetting was ‘extraordinarily reckless.’ The selective release and politicization of classified information sets a terrible precedent and will do long-term damage to the Intelligence Community and our law enforcement agencies. If potential intelligence sources know that their identities might be compromised when political winds arise, those sources of vital information will simply dry up, at great cost to our national security.

“The Republican document mischaracterizes highly sensitive classified information that few Members of Congress have seen, and which Chairman Nunes himself chose not to review. It fails to provide vital context and information contained in DOJ’s FISA application and renewals, and ignores why and how the FBI initiated, and the Special Counsel has continued, its counterintelligence investigation into Russia’s election interference and links to the Trump campaign. The sole purpose of the Republican document is to circle the wagons around the White House and insulate the President. Tellingly, when asked whether the Republican staff who wrote the memo had coordinated its drafting with the White House, the Chairman refused to answer.
“The premise of the Nunes memo is that the FBI and DOJ corruptly sought a FISA warrant on a former Trump campaign foreign policy adviser, Carter Page, and deliberately misled the court as part of a systematic abuse of the FISA process. As the Minority memo makes clear, none of this is true. The FBI had good reason to be concerned about Carter Page and would have been derelict in its responsibility to protect the country had it not sought a FISA warrant.

“In order to understand the context in which the FBI sought a FISA warrant for Carter Page, it is necessary to understand how the investigation began, what other information the FBI had about Russia’s efforts to interfere with our election, and what the FBI knew about Carter Page prior to making application to the court – including Carter Page’s previous interactions with Russian intelligence operatives. This is set out in the Democratic response which the GOP so far refuses to make public.

“The DOJ appropriately provided the court with a comprehensive explanation of Russia’s election interference, including evidence that Russian agents courted another Trump campaign foreign policy adviser, George Papadopoulos. As we know from Papadopoulos’ guilty plea, Russian agents disclosed to Papadopoulos their possession of stolen Clinton emails and interest in a relationship with the campaign. In claiming that there is ‘no evidence of any cooperation or conspiracy between Page and Papadopoulos,’ the Majority deliberately misstates the reason why DOJ specifically explained Russia’s role in courting Papadopoulos and the context in which to evaluate Russian approaches to Page.

“The Majority suggests that the FBI failed to alert the court as to Mr. Steele’s potential political motivations or the political motivations of those who hired him, but this is not accurate. The GOP memo also claims that a Yahoo News article was used to corroborate Steele, but this is not at all why the article was referenced. These are but a few of the serious mischaracterizations of the FISA application. There are many more set out in the Democratic response, which we will again be seeking a vote to release publicly on Monday, February 5th. Unlike Committee Republicans, however, we will ask the relevant agencies to propose any necessary redactions to protect any sources and methods not already disclosed by Chairman Nunes’ document.

“It is telling that Chairman Nunes put out this memo without bothering to read the underlying materials, and that he ordered changes to the document without informing his own committee members. It is a terrible lapse in leadership that Speaker Ryan failed to intervene and prevent the abuse of classified materials in this way. It is tragic, if all too predictable, that this President would allow the release of the memo despite FBI and DOJ’s expressions of ‘grave concerns about material omissions of fact that fundamentally impact the [Republicans’] memo’s accuracy’. But most destructive of all may be the announcement by Chairman Nunes that he has placed the FBI and DOJ under investigation, impugning and impairing the work of the dedicated professionals trying to keep our country safe.”
The memo and letter from the White House can be found here.

A copy I made of the Democratic members response to Devin Nunes.

55 years old. By training, ability and experience I am a master toolmaker. My most recent projects include designing and building a process to grind a G rotor pump shaft with four diameters and holding all four diameters within plus or minus 4 microns of nominal. This was an automated process using two centerless grinders refitted to my specifications using automatic load and unload machines plus automatic feedback gauging. I also designed and built an inspection machine to check for the presence and size of a straight knurl on a hinge pin using a vision system for non-contact gauging.
View all posts by Art →
This entry was posted in Art Joly, Main. Bookmark the permalink.