Or maybe I should say winter weather. We’ve had a pretty good run this winter with no snow on the ground until the morning of 12 JAN. Now its Friday the 13th and we have freezing rain. 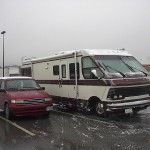 Earlier in the week the forecast was for rain and warmer.

We finally have our heating system working more or less reliably. After cleaning mouse’s nests out of the furnace we inferred after many hours of observation that the solenoid coils didn’t have enough power to reliable open the gas valves. We were lucky enough to find a parts furnace that had the newer generation gas valve lo and behold, the new generation solenoid valve draws twice as much current as the original. But the saga couldn’t end there could it? After several nights of relative comfort and fully discharged batteries in the morning — there’s nothing like going out in the rain to fill and start the generator before breakfast — we’re vacillating over our choice of replacement logic boards. We’ve already made up our minds based on our observations that our current logic board may have a failing relay so that sometimes the new gas valve is told to open and other-times not. New logic boards with the advantage of 25 years of refinement come in two flavors. Both offer a try three times before giving up but one will turn off the fan motor to save the batteries and the other won’t. So far we’ve heard an anecdote that the fan relay on the save-the battery logic board fail sooner than expected and we’re looking for more information before spending our hard earned money. As I sit here writing this a cold breeze on my legs tells me that I’ve had another did-not-light event. Cycling the thermostat off and then on again brings that solid click that tells my ear the relay has closed and the gas valve opened. We’ll need to choose sooner rather than later which board to buy because the one we have is sealed with epoxy and can’t be easily serviced.

What we’ve learned about out Suburban furnace is this: Fully disassemble and clean every year is a necessary thing. If only to confirm that the furnace is clean. Had we done this at the start we wouldn’t have pulled the furnace out four times in as many days cleaning further into the workings each time until we had cleaned everything.

55 years old. By training, ability and experience I am a master toolmaker. My most recent projects include designing and building a process to grind a G rotor pump shaft with four diameters and holding all four diameters within plus or minus 4 microns of nominal. This was an automated process using two centerless grinders refitted to my specifications using automatic load and unload machines plus automatic feedback gauging. I also designed and built an inspection machine to check for the presence and size of a straight knurl on a hinge pin using a vision system for non-contact gauging.
View all posts by Art →
This entry was posted in Full Time RV Life. Bookmark the permalink.